Inspired by cherished memories of Christmas past, Santa's Village Light Display provides a magical experience for visitors and creates a brighter Christmas future for families in need!

There's a reason the holiday season is often considered the most wonderful time of the year and it's not because of the presents, although those are always a nice surprise! This is the most wonderful time of year because of people like Fred Jakobsen and his family. Fred loves to spread Christmas cheer through kindness and an enchanting holiday light display that captivates audiences both young and old.

Although some people might think he's gone a little Christmas crazy, Fred is what we admiringly refer to as a Christmas enthusiast. He's also a charming husband and father who we have thoroughly enjoyed getting to know over the last few months. Fred lovingly calls his light display "Santa's Village" - an appropriate name given the amount of holiday cheer that can be found here!

The first inklings of what would become Santa's Village began not in Roswell, GA where Fred and his wife Darlene, have now lived for about 13 years, but instead some 800 miles away in Prairie Village, Kansas. The year was 1982 and their 2 year old son Chris was in awe over the colorful ceramic C9 lights Fred had used to outline the eaves of their home. Although his love for Christmas first began over 50 years ago when his grandparents took him to see a local Christmas lights and train display in Florida, seeing this bright eyed wonder in the eyes of his first born is where Fred says his journey toward creating his own neighborhood Christmas lights attraction began. This same amazement mirrored in the faces of visitors to Santa's Village is what motivates Fred and Darlene to take an entire week off from their full time jobs and spend over 120 hours decorating their home year after year.

The Makings of a Mega Christmas Lights Display

To create his incredible display, Fred starts setting up a week before Thanksgiving with the goal of being open Thanksgiving night. The decorating process starts with the dreaded hauling of the decorations from the upstairs storage down to Fred's staging area in the garage. After a thorough check to ensure that all lights are still working and no repairs are needed, the decorating begins! Darlene often helps with the outdoor decorating, however she also handles decorating the interior of their home which includes hanging roughly 1000 ornaments and keepsakes on their beloved 7 foot Christmas tree. Fred says she has an advantage though, since decorating the tree starts as early as the first week of November in their home. But this isn't really a competition, just a labor of love shared between husband and wife.

Santa's Village has morphed and grown over the years with more lights, decorations and animated displays added regularly, however one element has always remained constant: a working toy train display set against a quaint german village backdrop. In the past this train display would take over 40 hours to set up in the garage, however in September of 2012 a spark of inspiration came to Fred in the form of a 24 x 8.5 foot enclosed trailer complete with 3 large windows.

By Thanksgiving of that same year, Fred and his father had built out the inside of the trailer to include 2 running trains through a German Village, Santa's workshop with 22 animated figures, and an animated Santa's Band that played music and synchronized mouth movements to the songs! Not only had the train display grown in size and splendor, but it was now able to be left up permanently in the trailer which sits to the side of the driveway in its own little world of wonder. After a call to the local paper, Fred had a few hundred visitors that season and a generous donation of $1000 worth of toys to give to Toys for Tots. 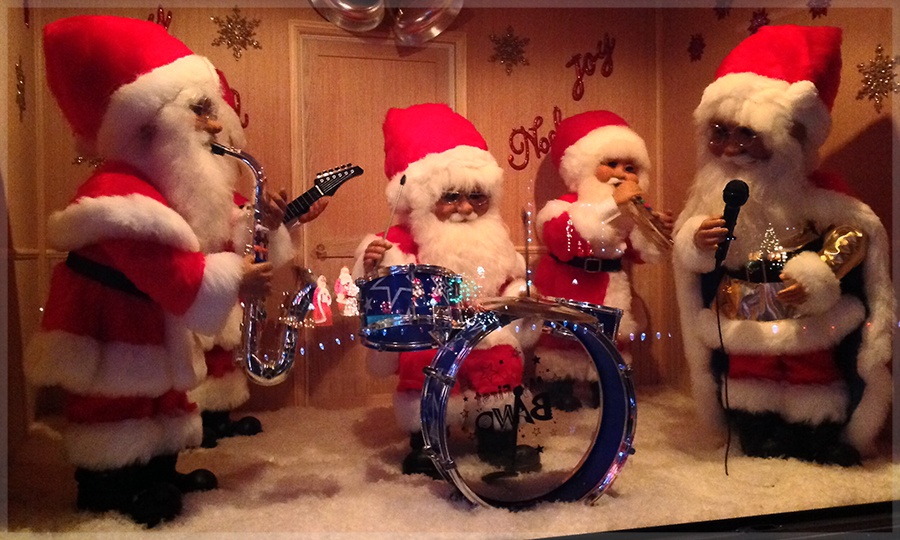 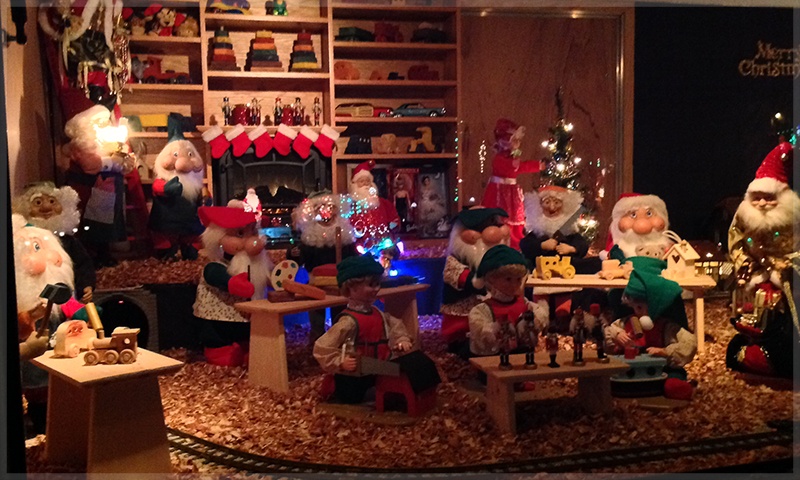 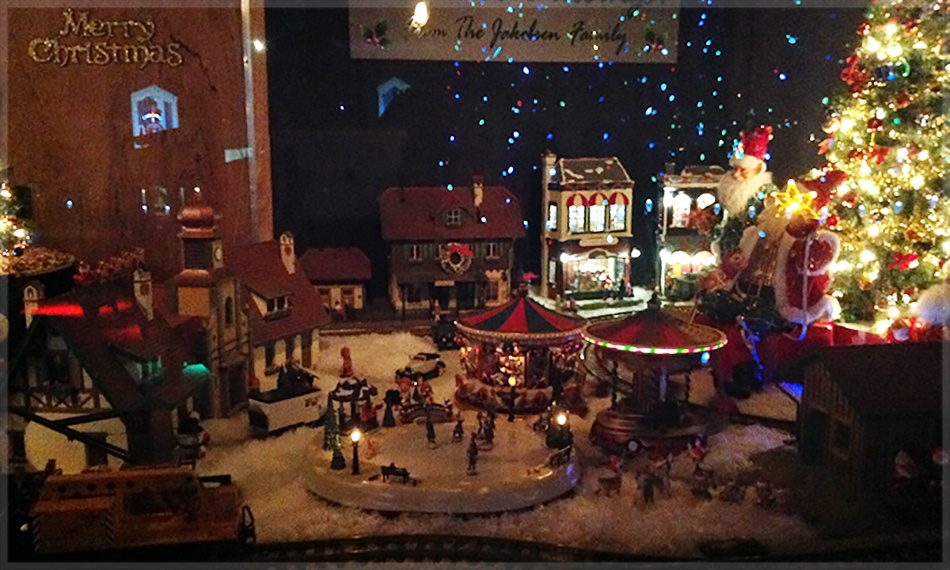 Something Big Rolls in to Santa's Village

By 2013 Fred had gone to almost all LED synchronized lighting which attracted the largest crowd yet of over 600 visitors and resulted in an even larger donation to Toys for Tots. Now with all of these big changes over just a short time span, you're likely thinking that this is an incredible man with a lot of enthusiasm for Christmas, and you'd be right. But Fred's passion for Christmas runs even deeper, so it was in 2014, 2 years after the addition of the trailer and expanded train display that Fred says he really lost his mind.

Fred wanted a better way to draw people out of their cars and into the yard to interact more with the display. So he thought that since trains had always been an integral part of his display and a cherished Christmas memory from visiting his grandparents, why not get a train big enough for people to ride? This seems less like someone losing their mind and more like a stroke of Christmas genius to us!

With his mind set on creating an even more magical display, Fred began his research process and as luck would have it he found that one of the best manufacturers of mall trains is located just outside of Atlanta! So, on December 16th, 2014 a four car mall train was delivered to Santa's Village and through the power of enthusiastic neighbors and social media, word got out about the amazing new arrival.

As a result, the crowds swelled to over 100 visitors a night in the week leading up to Christmas and the donation to Toys for Tots reached its highest amount yet. Over the three years since the mall train was added, more lights and decorations have found a home in Santa's Village & the crowds have grown exponentially with around 7,000 visitors in 2017 which resulted in a sizeable $12,000 worth of toys donated to Toys for Tots. 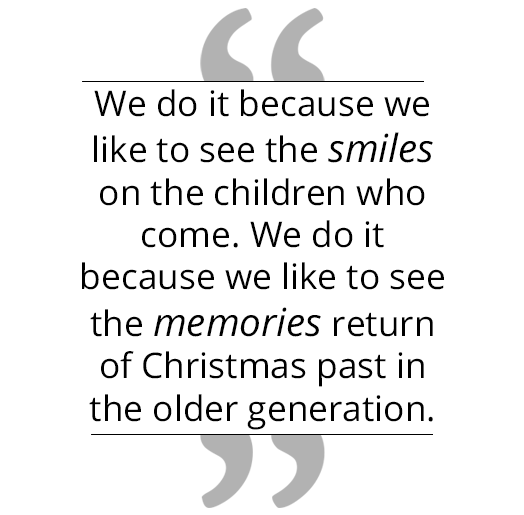 Giving Back by The Truckload

Making the yearly donation to Toys for Tots has become a family tradition in the Jakobsen household in which Fred and Darlene, their three children and their children's spouses, along with Fred's parents and brother go on a shopping spree to turn any monetary donations into toys...so many toys!

In addition to donations that are thoughtfully given by visitors to Santa's Village, Fred also works with a local daycare to collect more toys to give to Toys for Tots. For the last two years, the daycare has asked each of their approximately 100 - two to five year olds to bring a toy to school for donation. Then one day in early December Fred loads up the train, heads to the daycare and gives rides to each of the children and even some teachers as a way to say thank you for their generous contributions!

With the shopping spree completed and all of the toys collected, Fred and his family lay them all out on the driveway and take pictures! Then the toys are loaded into a 24 foot cargo trailer, and delivered to the Toys for Tots Warehouse in Marietta, GA. The photos aren't just keepsakes for Fred, either. Each year a Marine visits Santa's Village on behalf of Toys for Tots and is presented with the photo of all the toys that have been collected the previous year.

Toy Donation made by Santa's Village for Toys for Tots

Santa's Village has always supported Toys for Tots, and for a very personal reason. Toys for Tots is a program run by the United States Marine Corps Reserve which distributes toys to children whose parents cannot afford to buy them gifts for Christmas. As a former SFC in the US ARMY, serving 4.5 years active duty, and 8 years in the active reserve, Fred has an immense amount of respect for our service members and the sacrifices they make. But what's most important, he says, "is that Toys for Tots is an almost completely volunteer effort, and the breadth of their donations to so many downstream charities in the community is awesome." We couldn't agree more and want to take a moment to thank Fred for his service to our country and for his continued service through such amazing efforts in support of this charitable cause.

The incredible opportunity to give back through donations is just one facet of why Fred and Darlene find such joy in creating their incredible display. The other reason can be found in the faces of their visitors, young and grown whose eyes reflect those dazzling lights; taking in the wonder that has been so lovingly created for them by a Father who still remembers that magical twinkle reflected in his own son's eye so many years ago. 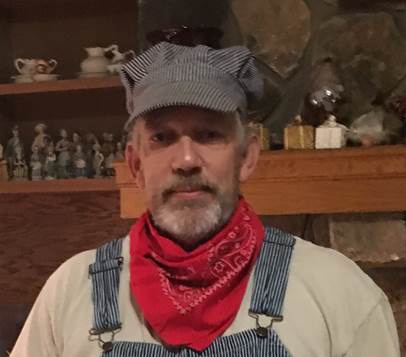 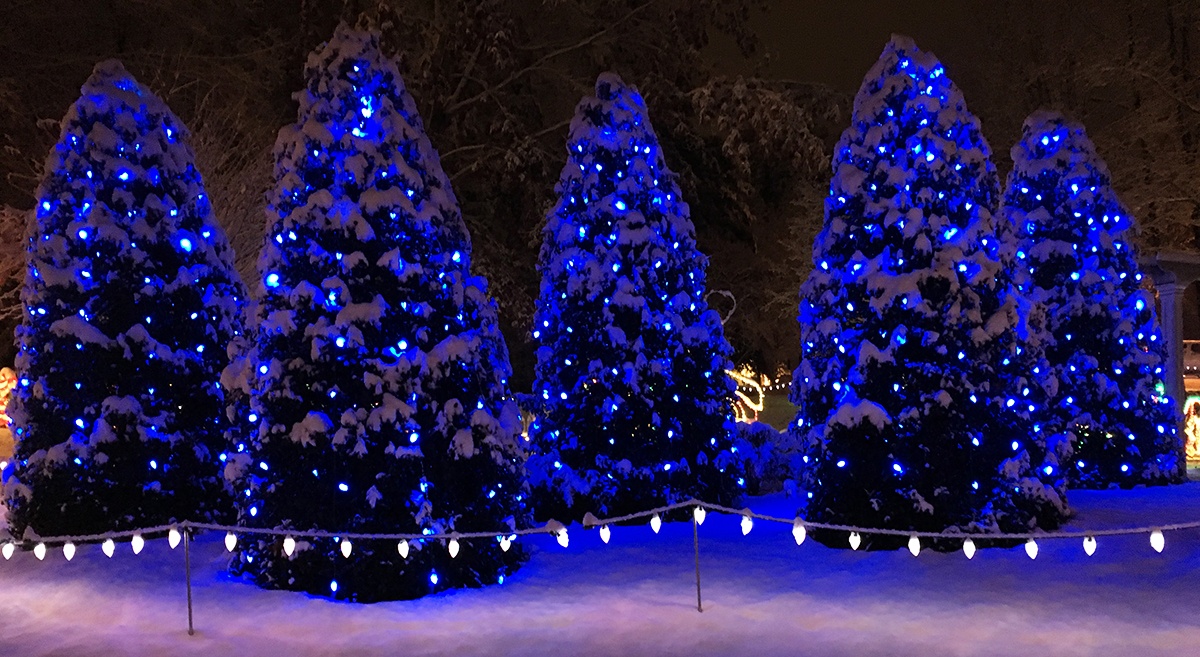 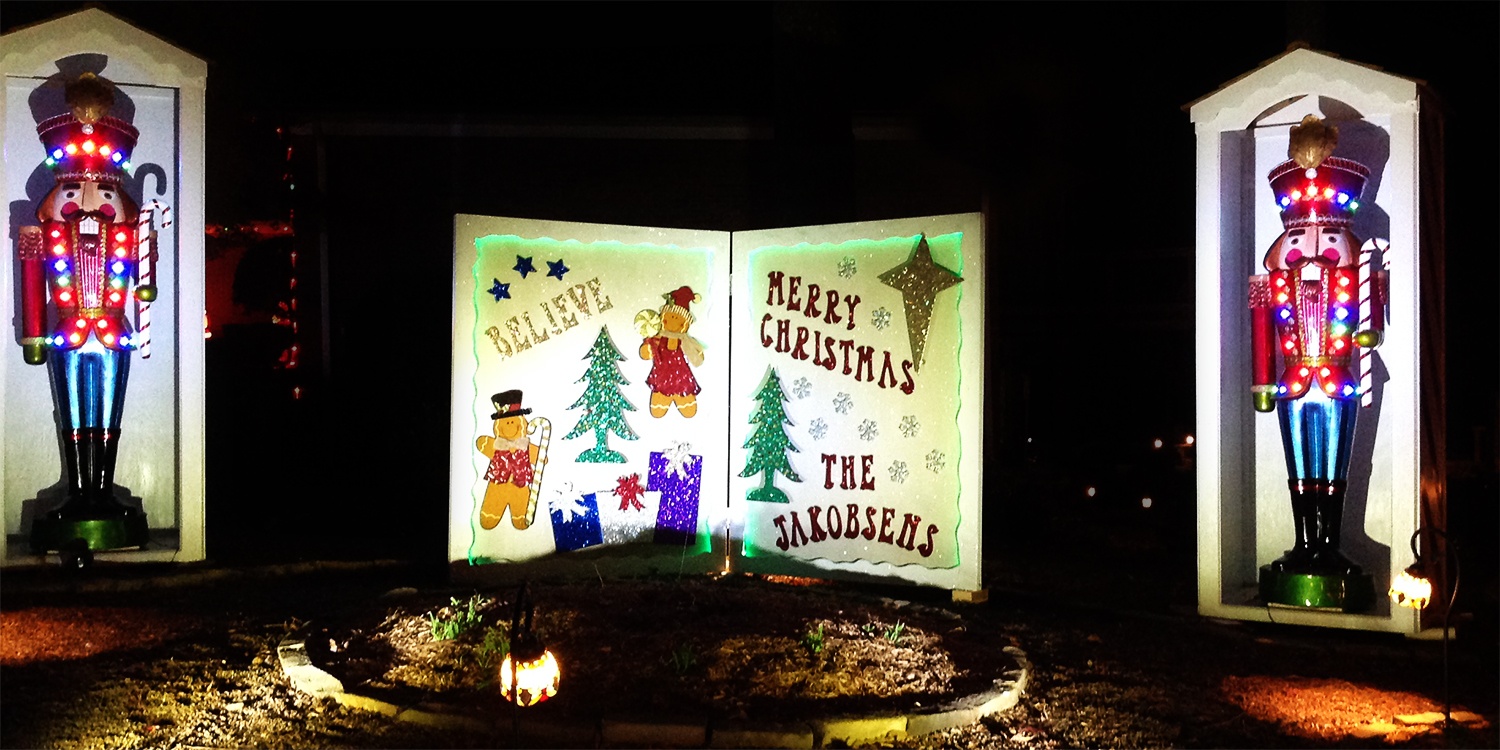 Merry Christmas from The Jakobsens!