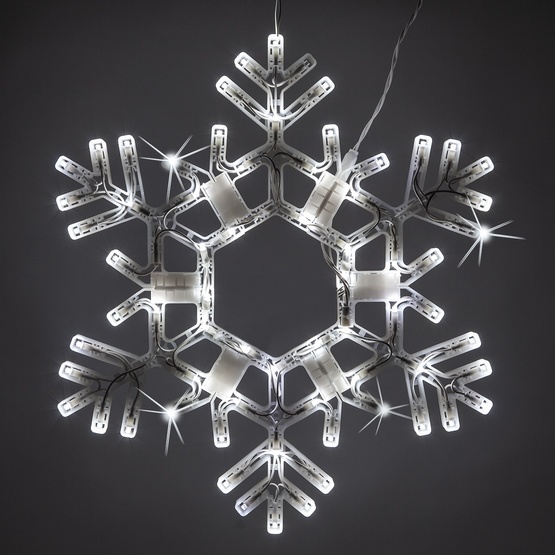 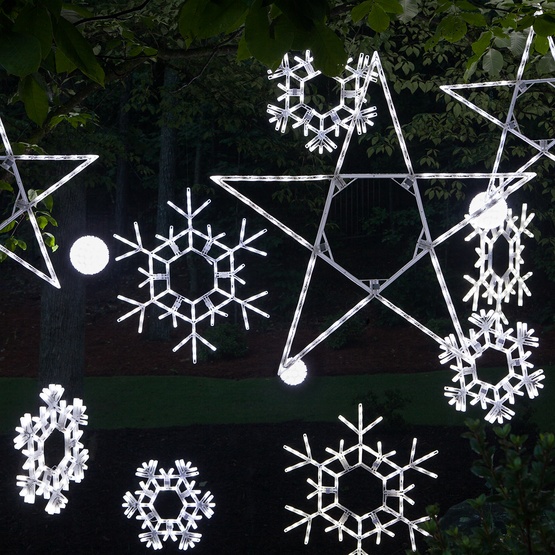 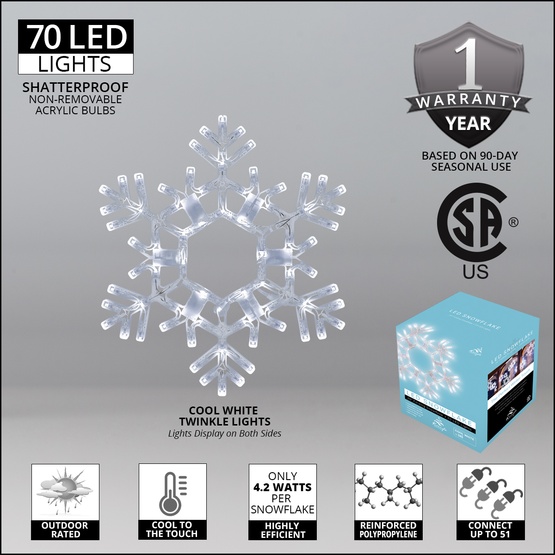 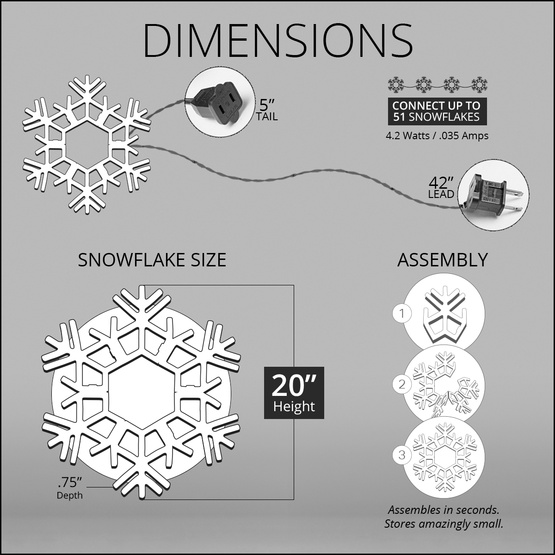 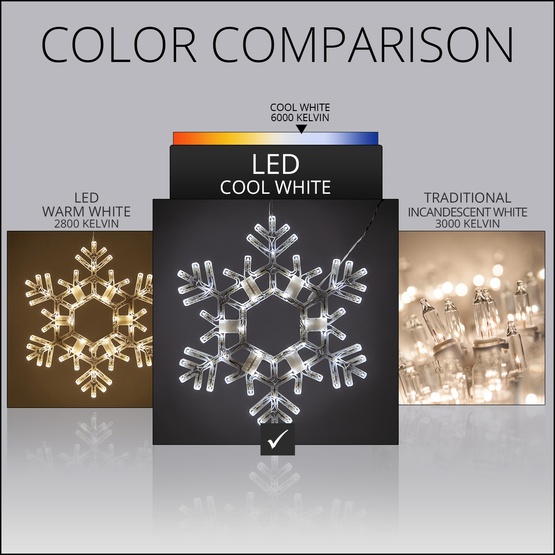 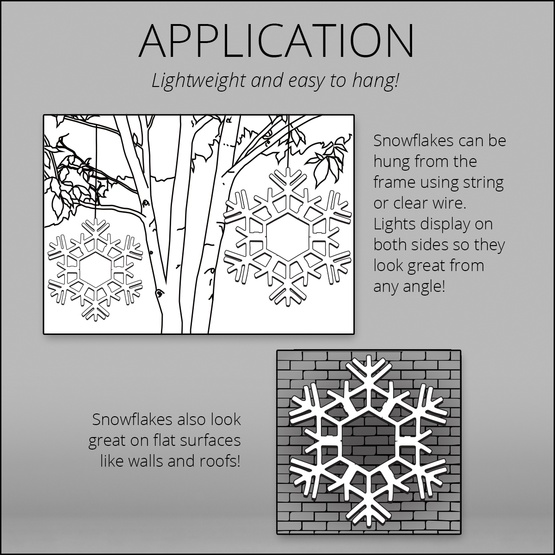 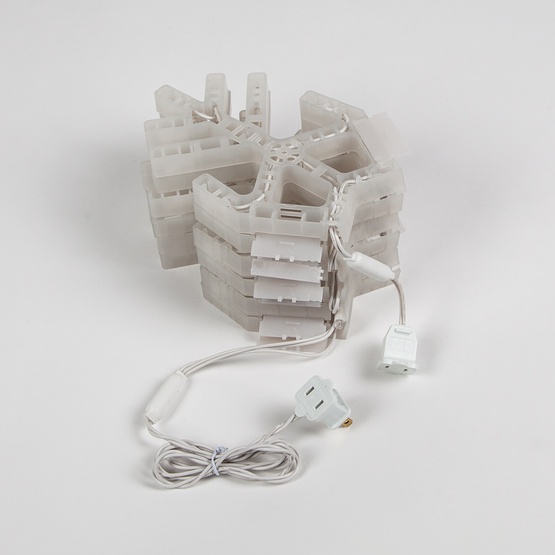 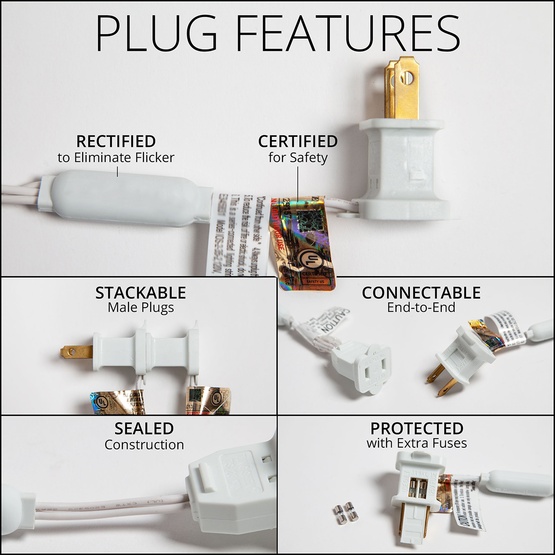 Add the mesmerizing effect of snowflakes shimmering in the moonlight when you add 20" twinkle LED snowflakes to your Christmas lights display! You'll love the highly durable, weather resistant construction and vivid illumination of 5mm Cool white twinkle LED lights! Create a magical outdoor display when you hang these stunning snowflakes across the porch or suspended among tree branches, then when the holidays are over just fold them away for quick and convenient storage!

Customer Reviews
Customer Rating
4.5 out of 5 based on 23 reviews
Write A Review

I am amazed at the easy storage. I am very pleased with the quality and size of my twinle snowflake.

Before buying these, I tried those LED floodlight bulbs from Lowe's with the rotating flake display, but returned them. They looked kinda cheesy and the constant motion was distracting inside the house where it shone through the windows. When my husband first drove up to our house and saw two of these snowflakes, along with one of the 36" ones, he said I "nailed it with the Christmas display." I've never used cool white bulbs before, but my theme this year was frozen/frosted, so these were perfect. I used blue floodlights on the house and set these up in front of the blue and they did, indeed, look quietly elegant. The softly shimmering light isn't distracting either and is very pretty. They are a bit pricey, but will be worth it if the quality is good and they hold up. Have only been up a couple weeks so it's too early to know for sure.

This product is very disappointing. Only a few bulbs actually twinkle. Also, the clips that hold the snowflake open are flimsy and cheap.

Folds up compactly when stored.

The service was excellent and the snowflake just shines! I am very happy with the product and service and would recommend this company and it's product. Thank you!

I ordered one of these snowflakes to try in an upstairs window. It is SO easy to snap together, and I loved it so much that I ordered two more. They provide a lovely twinkle in the upstairs windows.

I bought two of these snowflakes. They are just what I was looking for.

They look good, but don't have that wow factor.

Sturdy snowflake, much better than others I've had. I was amazed at how small they fold up, although I don't store them folded. I think it will last a long time, as long as the lights keep working. We put different sizes in our huge fir tree and they looked beautiful. Really like the twinkling effect.

These LED snowflakes look perfect on our house. The twinkling looks great on them! I have them mounted on our roof with others of different sizes. They look great from the street.They assembled so easy, and the construction looks like I will get many years of services out of them.Even when covered with snow, these snowflakes shine through and look very cool.I could not believe how small the box was that they arrived in. Even though they fold up to fit back in the shipping box, I plan to store them fully assembled. But it is nice to know that I can refold them for storage if need be.I plan to buy a few more and hope some different designs come out for next season. LED's are the way to go for both energy conservation and endurance.

I purchased 4 of these snowflakes for my front windows. I just hung them in my windows, and I have a wonderful lighted display. I'm not outside in the cold and, and I won't fall off the ladder into the snow! I've had so many compliments from my neighbors. They are so nice, I still have them up, and it is January 21st!

This is a great product. It actually comes in small square box. It is folded into 6 segments. Quite amazing really. Each one is one of the 6 segments of the snowflake. It unfolds easily and locks into shape with well designed snaps. I doubt I will fold them back up for storage though. It is sturdy and very attractive. The lights are very closely spaced on the 24 version so they are very bright. I highly recommend this snowflake! The people at Christmas Lights, Etc. are great too!

Awesome Star! This Twinkling Star is brilliantly made - just unfolds & snaps into place with ease . The twinkling effect reaaly sets the star off - would recommend this to all my friends - just awesome!

Love them! They are just what I was looking for and am so happy I found you on the internet. After Christmas sale was even a better find! Fast service and nice packaging. Thanks and will buy from you again:)

Very nice, although the 36" snowflakes are really nicer. Also, the mechanisms that fix the snowflake in place when unfolding are a bit flimsy. But it is really nice that they fold up for storage.

First, I like that this thing is foldable and can be stored in a compact manner. However, when out on my window lit on the dark of the night, the snowflake looks more like a flower. I asked my 8 year old kid and she agreed. I think there is just not enough light bulbs to shape it like a snowflake in the dark. Don't get me wrong, when the thing is not lit, it truly looks like a snowflake. Also, the light effect is more like a slow flash than a twinkle. I was looking for the shimmering effect but did not get that here. I guess you get what you pay for as the price is in the low end compared to some other. The light is not as bright either compared to the 36" snowflakes. Overall, it is a good buy if you are in a budget as Christmas decorations do add up. If I had to do it again, I would most likely reconsider for the better snowflake.

Cord is too short.

This item is everything it said. Very easy to put up and put away. Very pretty especially when it snows

I love these lights .We also purchaced your 36 inch blue and white snowflakes. They brighten up what is otherwise a dull time of year. Thank you.

Wishing that I had bought the warm ones, instead of cool, to go with all the other warm lights on the fence, but they are bright and cheery, and everyone seems to enjoy them on my front fence.

Love it, great twinkle - not annoying as some can be.