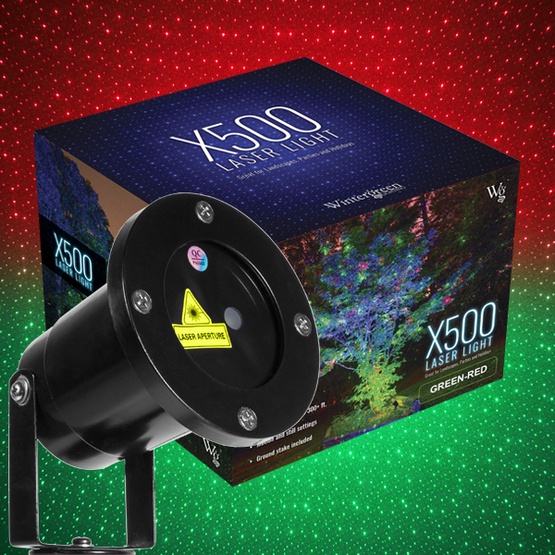 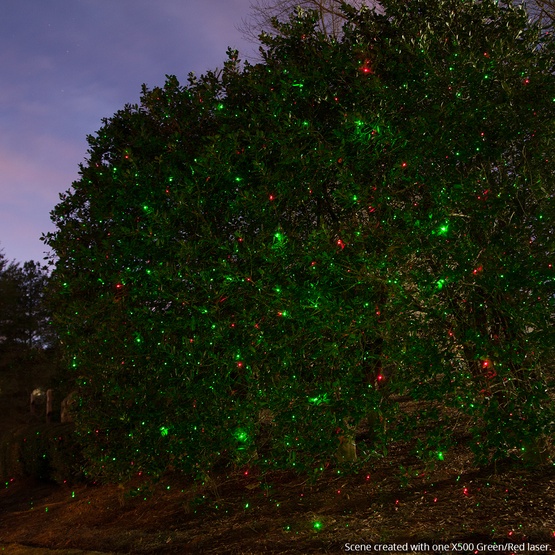 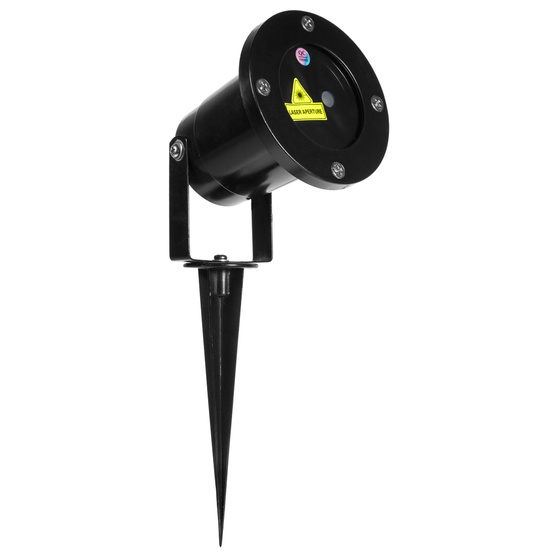 This item (V61881) is not currently available for purchase.

Create amazing light displays in seconds with new and innovative Christmas laser lights! With just the push of a button you can transform a woodline or garden area into an enchanting display. The glow of red and green lights through the trees will dazzle your guests and passersby. Laser lights stake right into the ground and with a 72 inch lead wire, installation is a breeze. An easy to use remote allows you to change colors, turn the lasers on and off and set the timer from a distance. You can display solid red, green or both depending on the night! In just minutes you can create a magical wonderland year after year.

Customer Reviews
Customer Rating
3.9 out of 5 based on 88 reviews
Write A Review

I was so excited when I got this. It was beautiful but it only lasted one season. When I got it out the second season it blinked on and off. I thought maybe I didn't have a good connection where it screws into the light. It then started staying on randomly. Now it's not working at all. I thought if I got a good laser light it would last a good while. Apparently this wasn't as good as I thought. It only lasted one season and I don't ever remember the red lights coming on. I honestly thought I only got the green. As others have said the remote doesn't work that great either but I really didn't care about that because my light was on a timer. I feel cheated paying $65 and only lasting one season.

It only took a couple of minutes to install the laser light, but it looks like I installed many strings of lights.

Easy to set up, and it looks great projecting up a large oak tree.

I researched this product and got exactly what I hoped for. My X500 Laser arrived as scheduled, the construction of the product was top notch and it worked just as I hoped it would. Good choice, good buy.

I haven't hooked up yet but the lights are beautiful.

My daughter had these laser lights on the tree in her front yard. I was so intrigued by them that I asked where she purchased them. Went right to your website and bought the red/green laser AND the blue laser. It really looks beautiful on our tree in the front yard. Very, very festive and classy. I would definitely recommend these lights and your company to anyone who would ask me where I got them.

Would not purchase again. Remote only works if within 3'.

I am very pleased with this item. Great display.

My laser light is wonderful addition to my Christmas decor! I would recommend it!!!

This is a very good laser projector; the lights are bright and can be seen from a distance. The problem is that the plug is NOT outdoor waterproof; it has to be plugged into an outdoor outlet with a cover. I live in a ranch-style townhouse and have nowhere to plug it but on the ground.

Love my lights that I was able to get with my $50 gift card from the Wendy Williams Show.

I bought one of these 500 watt and liked it so much that I just bought two more, all shining on the front of my house. They are nice and bright and look fantastic compared to another brand that I had last year from another company.

Disappointed that there were no programmed patterns.

Easy set up and lights are beautiful, but the remote only works if you stand directly in front of the laser screen. We have to run outside every night to turn off the lights. We wanted to buy a second one for our other tree but don't want to deal with this remote. Love the lights, hate the remote

I have only had the lights (2) in place for four days and already one of my neighbors came by to get information on how he could order some for himself. He said my lights were brighter than the new LED lights he just strung up on his house....Thanks!

Nice and bright, much better than the bargain brands

The green lasers are not consistently bright.

I bought three of these last year, but one is no longer working. A lot of money for one year of use. Would not recommend.

This product looks to be very substantial. I'm so excited to use it soon for this holiday season. My neighbor bought these last year and I was so impressed with them. Thank you for producing such a great product.

So excited.... I bought for my daughter in Minnesota. Going to be so beautiful out side with snow on the trees. Also, I bought a set for some friends in Florida to shine on their house outside. They're sooo excited. Thank you!

Just received it and seems to be well built and much better than the cheaper model that I had all ready. Good value

This is an excellent product!! It has rained for the last 4 days in a row, but it hasn't bothered my laser light one bit. It is still shining just as pretty as it did when I first put it in the yard. Gonna purchase another one next year.

Love it!!!!! We still put up our normal porch decorations, and the laser show just makes it great. Only negative is two would better cover our home so I will be ordering a second one. I think most homes would need two.

It is wonderful, we love it. The people cross the street got one, after me.....

This item is very nice. I bought it for Christmas next year, and will maybe use it this summer in my garden. I tried it out right away to make sure it worked, and it does. Very beautiful projection on whatever you focus it on. A neighbor had something similar projecting on her home for Christmas and I liked it. It was very cheaply made because the wind blew it over, and it shook with the breeze. It was made of plastic. I didn't ask her where she got it, I just went online and looked around for a better made product. This is very well made. I don't think a high wind is going to even touch this. It is metal construction, and a hefty weight. I was very impressed with it's construction. Even the stake was heavy duty. I would highly recommend this product. I am very pleased with it. I am going to follow the directions and add the plumbers tape just as an added precaution to keep the moisture out, just because I don't know if next winter is going to be wet, dry, or snowy. I always read the directions on use and care. I want to get the most use out of this product, and I believe it's going to last me a long time. It sure beats stringing lights, and that alone is worth the already reasonable price. You get what you pay for. I love this product. I am thinking on going back to get another one of a different color combination.

Excellent product, lights are brilliant in projection. It's made of metal and is sturdy.

I was amazed how many lights, and I wish I had ordered two.

First of all, I really like that the product is made of metal. Also, the display on the front of my house is very good. However, the remote is a weak point for this product. You have to get very close to the unit in order to use the remote.

These laser lights are very bright they're awesome. I will definitely buy some more next year.

So glad I reviewed this product and the one AS Seen On TV as this is much brighter, clearer, and better construction. I would have needed two of the other for my house where one of these covered more area that two of those.

Very bright! Equivalent to my neighbors 3 laser lights from bed bath and beyond. Happy with the purchase.

Great product!! This is much brighter than we thought! Much better than comparable brands.

The lights are okay; the green lights are much brighter than the red ones. The remote is terrible!! You have to be in front of the unit to use the remote.

These are the greatest thing since sliced bread, easy to set-up 5 minutes, and very powerful. We love them. ROGER NY.....

The unit is good itself, but the remote range is awful. I have to be within 10 feet of the unit for the remote to register, which is pointless as you still have to go outside to use the thing. Why have a remote?

Lights shine brightly as advertised, the first time we put the device in the ground the two metal arms from the laser to the stake bent to one wide. The device itself seems to be made very strong yet the rest of the device was not

We expected this laser to be superior cheaper versions sold in the big box stores. We thought we would be the envy of the neighborhood. However, we were not impressed with the light display.

Very happy with the lights. Was very surprised by how well they covered the area.

Plenty of power. Only flashes..okay. IR remote - must stand in front of unit to make it work. Not a great feature in the snow. The FM remote on the more expensive unit is worth the extra bucks.

Just What I Was Looking For

I have this light shining on a 40' Pine tree in my side yard. The tree is covered from top to bottom with lights. The green lights stand out much brighter than the red. I was hoping all lights would be somewhat brighter than they are, but overall I'm happy with the result. I certainly could not have strung this tree with any other kind of light for the same cost, and it was infinitely easier to set up this light.